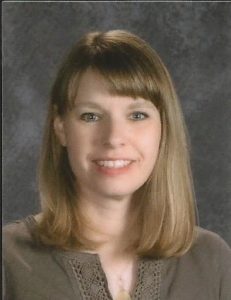 Kristen Jacobsen began teaching in the Harrisburg School District in the fall of 2017. She currently directs the 5th grade beginning bands at Freedom, Horizon, and Liberty Elementary Schools. Prior to teaching in Harrisburg, Mrs. Jacobsen taught 5-8 band in the Sioux Falls Catholic Schools, high school band at Dell Rapids High School, and 5-12 band at Sioux Valley Schools in Volga, SD.

Mrs. Jacobsen is originally from Brookings, SD, and received her Bachelor of Music Education degree from South Dakota State University where she performed in the Symphonic Band, Orchestra, Jazz Ensemble, and the “Pride of the Dakotas” marching band, including trips to perform in the presidential inaugural parade in Washington D.C. in 1997, the National Independence Day Parade and a production of the PBS “A Capitol Fourth” in 2000. In 2008, Mrs. Jacobsen earned her Master of Education degree in Curriculum and Instruction from South Dakota State University.

In addition to her duties with the Harrisburg School District, Mrs. Jacobsen serves as an adjudicator for local solo/ensemble contests, maintains an active private lesson studio, and served as the clarinet technician for the Lincoln High School Marching Band in Sioux Falls from 2003-2016. Mrs. Jacobsen has performed with the Dakota Wind Ensemble and the Sioux Falls Municipal Band.

Mrs. Jacobsen lives in Sioux Falls with her husband Adam and son Carter.